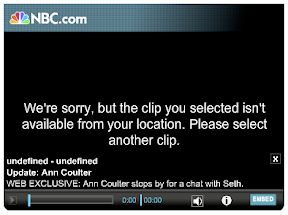 Well not really, not yet anyway. Sony recently announced that the first OLED (organic light emitting diode) TV will hit the market in December of 2007, but at ¥200,000 (~$1700 USD) for 11 inches it isn’t going to take the world by storm.

However this news brings OLED one step closer to become a practical alternative to LCD and Plasma TV’s. Why, you ask, would anyone consider an OLED TV? Here’s the list of ways that OLED can compete with LCD so far. OLED has:

But here is why you don’t want one today:

It seems at this point that OLED will be the standard, but it isn’t ready for the spot light just yet. Once they get cheaper, larger, and last longer they’ll be ready for prime time.

meanwhile there are lots of other potential applications of OLED in our futures. Take a look at what else it can do.

On the heels of iTunes getting rid of DRM in music NBC says they want more. NBC would also like to re-negotiate pricing and bundle shows. So far NBC has declined to renew its contract with Apple.

First issue: pricing. The pricing is fine. No one else really thinks it is too much or too little. Done.

Second issue: bundling. Users don’t want to be forced to buy a bundle and won’t like a change that removes a freedom of choice that they once had.

Third issue: DRM. Okay, more and more people are starting to agree that DRM is bad for consumers. Just look at Microsoft’s PlayForSure (which even the Zune doesn’t support) and Sony’s ATRAC (which has been dumped, leaving owners of those music file holding the bag). DRM limits how legitimate owners can use their purchased content and creates a situation in which it is likely that users will be locked out of different devices or just plain lock out of ever using the content again. The good thing is that many people just won’t purchase DRM burdened files. A user on one forum wrote a response to NBC’s demands:

Either I can buy a season of Scrubs and the Office when it starts again or I can find it in some other manner that will not benefit NBC at all.

This exemplifies the main issue with DRM, that is that it agitates the problem it seeks to solve. By demanding an increased cost and adding DRM NBC simply pushes customers towards peer2peer sites and of course that will be far worse than unbundled slightly DRM’ed $1.99 TV episodes.

update: NBC and Apple are splitting ways. Apple has announced that they will not carry NBC shows because NBC wanted each episode to sell for $4.99 which is more than double what they cost now. We’ll see how NBC likes it when their own service fails and people turn to the peer2peer networks. It will be especially interesting to see how this effects the popularity of its shows, considering it was iTunes that saved the award winning show The Office from certain death.

NBC is doing something new. No, it isn’t a a new version of Law & Order— it’s something really new. They’re putting a new mid-season replacement show out onto the interweb before airing even one episode on TV. That’s right, Andy Baker P.I. is available for download on iTunes and streaming for free on nbc.com.

The show which stars Andy Richter and is co-created by Connan O’Brien is actually pretty funny. It isn’t great TV, but then again most TV isn’t. It is an original concept and it made me laugh. I’d be interested in seeing if it can sustain.

The idea of putting all the episodes online (there are only six since it’s a mid-season replacement) is interesting. I can only assume it is a move to make sure the show has a chance to be seen considering this is a time when no one really expects to see new shows. But I wonder if it will backfire. I’ve already watched the entire season and I can’t say that I am interested in watching them on TV where I’ll have to sit through painful commercial breaks.

It also makes me wonder if NBC is considering a day when they will try to take advantage of the internet more. Testing the waters of web only content? It may be a little early to go that road, but I wonder if maybe they are interested in seeing where they get more viewers.

There isn’t much that can make me crave TV lately, but one show that does is Extras. The sad thing is that you need HBO to get it in America, but it looks like you can watch episodes on the BBC2 website (you’ll need real player, which I don’t have/want so I can’t vouch for what is actually there).

Extras is another one of Ricky Gervais‘s projects and let me tell you, it is funny in that beautifully painful way that it seems only Gervais can really make work. I won’t go into the details since wikipedia and imdb do a better job than I could. But I will say that it is funny at at times just over the top but stays grounded with moments of struggle and frustration known to everyone. And though most people probably can’t relate to showbiz the situations are very relatable. This is the man that created The Office which has also had great success as a US Sitcom.