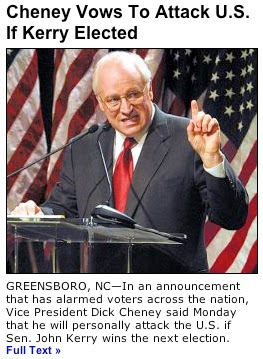 I found this screen capture from The Onion recently and it gave me a soft sad laugh. The caption reads “Cheney vows to attack US if Kerry elected.” It’s funny to me because it kind of strikes me as half true, it’s a dark joke about how folks like Cheney seem to see a lot of the American public as adversaries instead of a group of people who’s voices need to be heard.

“Lucky” for us Kerry was never that great of a candidate so we didn’t need had to see how far Cheney was willing to go to win.

It is no secret that they world is full of dummies, but come on! This guy robbed a liquor store wearing duct-tape on his face. As he was making his getting away with the “loot” (two rolls of coins) he was chased down and caught by the liquor store people who tackled and held him until police came. But that isn’t the best part… this fella claims that they’ve arrested the wrong guy! Obviously an easy claim to backup as the city if full of people with two rolls of coin in their hands and duct tape covering their faces.

The question is, what will The Onion do if real news continues to imitate fake news?