This is a from a page of Superman number 1, printed in 1938. I for one am glad these days are behind us. Thank goodness for the six decades worth of politicians promising change. Otherwise, where would we be now?

From The NY Times:

Mr. McCain, a Republican from Arizona, said on the CBS news program “Face the Nation” that President Obama should sit down with Republican leaders and begin adopting some of their ideas for improving the nation’s health care system such as overhauling medical malpractice lawsuits, allowing residents of one state to buy health insurance from a company in another state, and granting tax credits for people who purchase health insurance on their own.

My opinion of John McCain has gone completely south. What an obnoxious thing to say. As senator Richard Durbin pointed out Obama tried to get Republicans to join him in reforming a system that abused the American public and they wouldn’t have any of it. What’s more he pointed out that “170 Republican amendments had been accepted.” Durbin called McCain’s statement improper. That’s being to kind, it is an outright lie.

More importantly, these ideas do not help the American public at all. Changing medical malpractice laws won’t make insurance companies stop dropping sick people and denying healthcare. All of these “ideas” only help lower the cost of insuring people, but only a very silly person would think that’ll translate to lower costs for Americans. It’ll translate to more profits, unless they get some federal pressure.

The most insulting of all the ideas is tax credit for people buying their own insurance. If you don’t make a lot of money you aren’t paying taxes anyway. Subtracting $200 from zero means you still pay zero. It doesn’t mean you get any more money back. This may help, in a very small way, the small portion of the middle class who do not have employer sponsored healthcare, but that’s it. 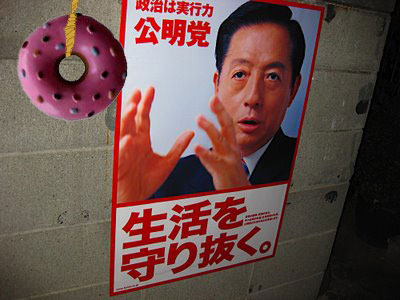 The poster declares 「生活を守り抜く。」 (defend their lives), but his pose says, I love the part in Billy Madison where Billy acts out Shakespeare.

How could anyone take a man seriously when he has a poster printed that makes it look like someone is dangling a doughnut in front of him? Is he going to defend our lives from doughnuts by eating them all?

One thing is for sure, I giggle every time I see this.

Rac•ism ˈrāˌsizəm
the belief that all members of each race possess characteristics or abilities specific to that race, esp. so as to distinguish it as inferior or superior to another race or races.

Prejudice, discrimination, or antagonism directed against someone of a different race based on such a belief. (New Oxford American Dictionary)

I’ve heard the term “reverse racist/racism” thrown around from time to time (most recently by Rush Limbaugh) and it has always confused me. We don’t use the word reverse this way for anything else I can think of.

What would a reverse racist be? Someone who doesn’t believe that people from one “race” posses certain characteristics and discriminate based on those beliefs?

I know that the people who use the phrase would say that it is when minority groups are racist, but that only creates more questions. Like: why aren’t they just racists then?

Rush Limbaugh seems to agree with the idea that racism needs power, going so far as to point it out after a long series of non-sequiturs defending his reverse-racism accusation. And if you keep reading the Rush Limbaugh’s transcript you’ll also see he says that Obama and Sotomayor do have power. I guess looking for logic in Limbaugh is like looking for hookers on the moon.

It seems that people like Limbaugh just mean racist, so why use the term reverse-racist?

To stir up racial tensions because they are afraid. And because they realize even with a black president America is still a country dominated by rich white people and they’ll sound like assholes calling a black or hispanic person a racist when the truth is white people in the US don’t really face racism at all.

Maybe I’m wrong though. Has anyone heard of a person not getting promoted or hired strictly because of being white? Don’t sing that affirmative action song, though, you’ll just sound stupid. It is one factor in many for hiring, promotion, and entrance to college. It is more a mythical excuse than a reality. Most of all it is bullshit though, white women are the largest beneficiary of affirmative action. So white people are doing alright by it too.

America is fast becoming a country where race isn’t the real issue anymore. It is class. The rich have power, the poor have none, and the middle class shut up and keep their heads down hoping to work their way into the upper class where they can have that power too.

Rush Limbaugh isn’t complaining about race at all. He is complaining that black and hispanic people are reaching more and more positions of power. He is afraid. He sees that the makeup of america is changing and fears that fat loud mouthed jerks might not get radio shows forever. I can’t blame him for being afraid, but I just wish he’d be more honest about it.

Three contractors are bidding to fix a fence at the White House. One is from a city place and therefore must be evil. The other two are honest Americans, from honest American places.
The first honest one says, “I don’t want the money, give it to people who are already wealthy because they know so much about money and probably care about me for some reason that only I can imagine.” (a few months later he goes out of business and loses his house)
The second honest American says, “I’ll charge you for it, but I won’t spend the money” (a few months later he starves to death)
The evil city guy says, “I’ll charge you for fixing this fence. Some of that money will go to pay my crew, some will go to me. We’ll spend some of the money we get. A few of my guys are lazy though and don’t deserve the pay as much as the others (and to be honest one guy just sleeps all day, but he’s my cousin’s kid so I can’t fire him). I don’t like it, but there is no such thing as a perfect solution so I’ll just deal with it because I know that the other two guys have really bad ideas that have failed historically.”
Rush Limbaugh appears out of nowhere and eats the city guy.
And that my friends is how some people would rather have it.

I can’t speak with any authority whatsoever on the subject of Israel and Palestine, but I’m trying to learn more. What I’ve learned so far has mostly shown me that I have a lot to learn and that it is a problem without an easy answer. A situation where it seems everyone involved is culpable, and where every step forward is tiny and slow while backward steps seem gaping and (recently) rushed. I was interested to hear Sir Gerald Kaufman’s take on the situation, though I still don’t know quite what to make of it.

Palin said, “I think if there are allegations based on questions or comments that I made in debate prep about NAFTA or about the continent versus the country when we talk about Africa there, then those were taken out of context, and that is cruel and mean-spirited, it’s immature, it’s unprofessional, and those guys are jerks.”

The other thing is that her complaining about people making negative allegations is hypocritical to the Nth degree. The minute you tell the world that someone is “paling around with terrorists” (note the plural) based on one flimsy association you give up the right of being indignant on anything but total fiction, which judging by her own comments, this is not.

I’d meant to post this when it first came out, but I got busy. I decided it was still worth posting as a reminder than this woman should not be in politics. There is no more room for misinformed, hateful, divisive people in politics. As Americans we need to take strong measures to try and keep as many of these folks out of the picture as possible.

Montreal’s Marc-Antoine Audette and Sebastien Trudel prank called Palin claiming to be French president Nicolas Sarkozy. I feel bad for her, but it does illustrate once again just how unprepared she is to be remotely close to the oval office.

I first started writing this blog post back when the details of Palin’s abuse of power were emerging. I was, and still am, fascinated by the way rogue and a maverick are being used by the republicans.

The New York Times Article said this of Palin:

Since then, her explanations have evolved, from saying that [Walt Monegan] was lagging on filling trooper vacancies and tackling alcohol-abuse problems in rural Alaska to showing an “intolerable pattern of insubordination” and a “rogue mentality” by resisting her authority and spending reforms, sometimes publicly.

What makes all this more interesting is that now Palin is being called a rogue herself.

Princeton’s wordnet says that a Maverick is “someone who exhibits great independence in thought and action” and that a Rogue is “a deceitful and unreliable scoundrel.”

There is no case for calling Walt Monegan a rogue, or at least no evidence pointing to his deceits and scoundrelness. We can say, however, that Palin has been deceitful in her characterizations of Obama. But that was all happening when Palin was still a Maverick. It is only now that Palin has said things that the McCain campaign doesn’t love that the word rogue has been applied.

This doesn’t change the fact that Palin shouldn’t ever hold any public office again, but it does illustrate nicely how the Republican party has been twisting language to stab at anyone they see as an enemy.

Notice any similarities? Why is it that satire always has to come back to bite us?