Haven’t heard much from Biblio, so I can’t push this just yet.

This is the title track from the newest album, Ambivalence Avenue. It has a nice vibe to it, hovering over the cozy border of music you can listen to actively or just keep in the background. It’s theme music for real people.

Looking at iTunes, it seems though that the other tracks, move in a fairly different direction though. All things being what they are, Biblio deserves a listen.

This song is from the album She’s the Dutchess, He’s the Duke
.

Pale Young Gentlemen has had their album sitting on my iPod collecting iPod dust for weeks and weeks. I finally accidentally listened to their new album Black Forest and had a few moments of bliss-ish-ness. The album isn’t perfect, but it is a good listen. The YouTube pickings are decidedly weak, this is their best offering which ironically is a song that doesn’t seem to have ever made it to an album. For my money I’d go with “There is a Place?” on their newest album, but I still have to spend some quality time with the album to be sure it’s my favorite track. Others like the “The Crook of my Good Arm.” Of the two I could only find the former, hit it below the video.

This is Saul Williams [1][2] He does a lot of interesting things. Here he is collaborating with Cx KiDTRONiK [1] [2]

Saul Williams recently came out with The Inevitable Rise and Liberation of NiggyTardust! [1] Making this Saul collaborated with Cx KiDTRONiK and Trent Reznor or Nine Inch Nails

Afropunk is something apparently. There is even a movie about it. Saul Williams & Cx KiDTRONiK seem interesting enough, so I’d also be interested in seeing this movie.

And just to be clear Cx KiDTRONiK is not to be confused with the crappy French song entitled KidtroniK.

While the major music labels scramble to beat down customers after failing to keep everyone buying CD’s, others thought of new ways to sell music. Collectibles and the like have been slowly cropping up as one viable alternative.

Of Montreal is doing just that with their new album, Skeletal Lamping, due out October 7th and available for pre-order starting September.

There will be seven different formats from which to choose: CD, 180-gram LP, T-shirt, tote bag, button set, paper lantern, and wall decal set. All seven will feature a digital download of the album. (full story)

You don’t even have to worry about some useless plastic disc, you can get it digital and then add in a tote bag… I’m in! I can only hope that this kind of thinking becomes the norm. Let’s save plastic— kill the disc! 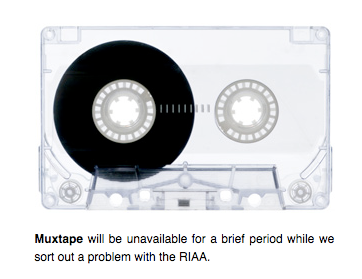 MuxTape, the website where people could make online mix tapes and purchase new music via itunes or amazon, is down and possible out.

Looks like the RIAA scored another point. This should be no surprise since they’ve been very good so far at winning the game to destroy their own industry. God forbid I listen to music and discover new artists. Though maybe their problem was that the music I was finding was mostly not on major labels. Of course for me, this is a mixed bag. I liked MuxTape a lot. But I’d also love to see the music industry destroyed. Music needs to return to a place where it is no longer an industry. Then musicians can make a living and create great things and all the garbage that music execs throw at us can go spinning into oblivion.

I’m probably just finding out about Shizuo now because YouTube exists and Shizuo has been gone for a long time. I was still in High School when this video came out. I guess I can live with myself for missing it since I was more interested in running a faster 5k and listening to Radio Head back then. Check out Shizuo. Even the video is fun! It seems like the grandfather of paperrad.

Here is another band I’ve been listening to for a little while and enjoying. Les Savy Fav has been around for quite a while. “After the Balls Drop” is a great album if anyone is interested.

I think that IP is one of the largest issues going and to make it worse, people don’t know anything about it. That’s what makes it so dangerous. Corporations are slowly but surely gathering more and more power over IP, many people think that this is good for businesses because they can protect their interests, but that’s not really what IP is about. IP is more about anti-competitive behavior than anything right now. It is being abused by crooks who extort money from businesses by claiming overly broad and obvious copyrights granted by people who don’t understand the concepts they are certifying. It is also being used by larger companies to lock out newcomers. An example of this is Vonage being sued by Verizon. It is also used to try and kill derivative works, like The Grey Album, by Danger Mouse. Stifling creativity not just in the art but in the sciences as well. IP is used to create artificial monopolies, like MLB saying people can’t disseminate the facts (which are currently not part of IP) of a baseball without authorization. But worse of all it is abused by people who just want to silence others, the DMCA for example has been widely abused to do just that.

IP laws need to be reformed so that they are balanced, so that they protect people first and businesses second. I don’t want to win second place to an artificial person (ie corporation).

It’s been a while since I listened to Joan of Arc. Honestly, I love their music, but nowadays I find I need to be in the right mood— mostly because I associate some of the songs with gloom late teen angst. But they are and always will be an interesting band. The song I’m pretty excited about right now is “Many Times I’ve Mistaken.” Here is a video of the song at SXSW.

The sound of course in only so-so. If you want to hear the song properly try this: