First, I want to say that I love my iPod Touch. In Japan it was a constant companion. It was my map, my music, my entertainment during long commutes, my study aid, and a few other nice things along the way. Each very of iOS has brought with it a slew of enhancements that make it easier and more enjoyable to use. Unfortunately, each iteration of iOS brings something else as well, preloaded BS apps. While the available storage options have climbed, there is still just a scant 64gb peak. That means the iPod Touch and iPhone is more of a storage hill than a mountain.

This is a minor inconvenience. In the first version of iOS Apple decided users needed to have an app that let you watch YouTube (rarely use YouTube), write crappy Notes in sub-standard font, and told you about Stocks (I have better options) and the Weather (same as stocks). At first it didn’t seem so bad, but then came FaceTime and Game Center (neither have felt so much a single tap from my fingers).

Now comes NewsStand, yet another thing that I won’t use trapped on my iPod. This time Apple outdid itself, though. While none of their crappy and useless (to me) app are deletable, they at least allowed those apps to be put out of the way in a folder that I never had to worry about opening. NewsStand, on the other hand, spurns every effort to tuck it away.

Fast-forward to this very instant. As I type, my iPod is restoring from a backup. Once that finishes I’ll be the proud owner of a jailbroken iPod Touch. For the longest time I ignored jailbreaking, because it was just too much of a hassle for me. That changed with iOS 5. I want at least a third as much control over the device I own as Apple current holds over it. Hopefully, I’ll get that.

I really hope that Apple gets their act together. Until then I didn’t really see anything in iOS 5 that was worth the annoyance of the new crap they jammed it up with.

iPod Touch, I love you, but if you keep it up, it might be time we see other people.

The iPod Touch has had some weird glitches and bugs, but this one pops up for me often. It seems that sometimes the iPod Touch get’s confused about whether it is horizontal or vertical. Instead of choosing one it tries to hedge the bet by taking a little from column A and a little from column B. If you shake it or just leave it alone for a while it’ll figure things out and get back to normal eventually.

Back in 2004 my brother brought home Fight Night. It quickly became a game where me and my brothers put our egos on the line (and consequently made angry accusations of cheap fight styles and cheating). To put it simply, it was fun.

When I saw that a new boxing game with decent graphics had hit the app store I was interested. I bought it and, for a few moments, I thought Touch KO would be fun. But that thought was quickly disrupted.

First the game was too easy. I’ll admit it gets (a little tiny bit) more difficult as the game wears on, but that also becomes a weakness. Why? Well, read on. 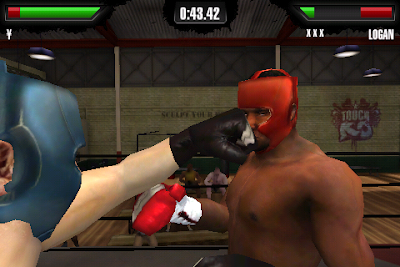 END_OF_DOCUMENT_TOKEN_TO_BE_REPLACED

A while back I posted about a guy discovering that through forensics you could get tons of data off a used iPhone. There was a method to wipe iPhone data, but it require jailbreaking the iPhone and then doing a much of command line stuff. I doubt the average consumer did it.

So now the same man has delivered a much simpler system. Jonathan Zdziarsk has created an app for the iTunes store that securely erases your data from the iPhone. It is called, of course, iErase.

Zdziarsk describes just how easy it is to use:

Q. I am selling my iPhone / iPod. What should I do?
A. Before running iErase, you should reset all of the information on the iPhone. The most thorough way to do this is with a full restore, or a quick way is to “Reset all Settings” on the phone. The restore process only performs a quick format, however, and doesn’t wipe everything, and the “Reset all Settings” process only deletes your personalized files, and doesn’t even format the device. In both cases, you’ll want to follow up your restore by running iErase. Once your personal data is removed – keychain passwords, configuration files, email, etc., iErase will then wipe over all of that to ensure it is beyond recovery.

Today I decided I’d like to buy a Lonely Planet travel guide. I’m looking at the Japan guide. At Amazon I can get it for $19.13. I have an iPod Touch now so I though, maybe since they have all those snazy phrase books as apps for the iPhone / Touch they have PDF’s of their books. They do, but they dropped the ball completely. The PDF’s cost the same as the suggested retail price of the physical book— almost $30. Considering how much cheaper it is to sell an electronic file it should be at least as cheap as the physical book on Amazon. Or even better, those buying the book should get free PDF’s. I’d sign up for either of those, but who in their right mind would pay more for something that should cost much much less?

As a result I’m going to look elsewhere. I may end up buying the paperback, but I’ll freeze in hell before being squeezed for some jacked up PDF.

It is also worth noting that the aforementioned iTunes Apps have received somewhat poor reviews. To me this is a signal that Lonely Planet is not ready to make the next digital leap and that a smarter more savvy company has a golden opportunity laying in front of them.

After years of a rumored touchscreen iPod Apple finally unveiled the iPod Touch. Trouble is $400 dollars only gets you a tiny 16gb hard drive. Pay $300 and you’ll get a microscopic 8gb hard drive. The nerds are not happy.

The macrumors forums say it all

For the first time in my Apple life I am actually angry with an announcement….

Not even going to consider this one until it gets at least 60GB of storage.

You have to wonder what Apple was thinking. Surely there must have been some sort of focus group that would’ve told them people didn’t want something that small. If the technology isn’t there or is the hardware cost is prohibitive a person could understand the rationale, however the thing isn’t going to sell very well considering it’s not any better than an iPhone and comes without cellular service. And some silly wifi music store isn’t gonna be pushing sales, so stop beating that drum Steve. 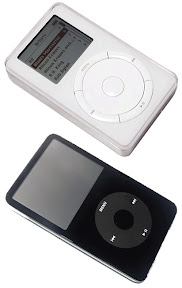 Do I want an iPhone? Of course, it is a neat toy… I mean tool. Seriously, it is cool and useful and sexy which doesn’t always happen all at once. Still it does use AT&T which sucks. In fact, that alone is a deal breaker for me even if people are able to play old Nintendo and arcade games on their iPhones and even if people are hacking them to add new useful features. Not to mention the folks who are dreaming up new apps for the iPhone.

The other thing that helps stave off my iPhone desires is remembering back to my first iPod, which was the first generation iPod. The iPod was a lesson to me, that lesson was that what is small, sexy, and useful today is tomorrow’s fat, clunky, imperfection. So if I do get an iPhone it will be a second generation iPhone (hopefully without crappy AT&T service… even if I have to unlock it myself).

A Texas company is suing the top mp3 makers for infringing on their patent. What patent? Portable MPEG players of course. Sound absurd? It is, but that hasn’t stopped it from working in the past and it probably won’t prevent it from happening again in the future.

It wasn’t too long ago that two print-on-demand companies, Amazon.com and Lightning Source, found themselves losing a similarly ridiculous sounding lawsuit. That lawsuit was based on the infringement of a patent for printing books on demand. The patent basically just describes printing one book at a time and storing that book on a computer. Lots of people have done that prior to 1993, but Harvey Ross was the one who staked the claim and in doing so his company won $15 million dollars.

Amazon hasn’t always played the part of the hapless victim though. Back in 1999 Amazon filed an infamous lawsuit for infringing on their patent for one-click sales, Barnes and Noble got the dirty end of that one.

Patents have been screwy and contentious as far back as Eli Whitney’s cotton-gin. This new footnote in that sad history is a lawsuit that comes from Texas MP3 Technologies, they’ve gotten this patent through MPMan, which was the maker of the first commercial mp3 player. Commercial because in reality people were experimenting with making their mp3’s portable on their own before there was ever an MP3 Player on a shelf.  Which raises the point— some things are just too damn obvious to deserve a patent. None of these “concepts” here are breakthroughs, none of them are systems that no one had ever considered prior to someone filing a patent. But that doesn’t stop the US Patent office from handing them out like ice cream on a hot day.

Every now and again there is a great example of how patents, trademarks, and intellectual property in general is being misused. A lot of companies are on both the receiving and giving end of this circle of pain, and if it was just a bunch of stupid corporations beating each other up it wouldn’t be so bad.  But it isn’t just bullies beating up bullies.  Ordinary folks are hurt by intellectual property owners all the time.  Ever wonder why the laws don’t change despite it being such a liability for corporations?  Because the make more than they lose, and if that is the case then the extra money has to come from somewhere.  Guess where that is.  Look in your pocket.

I want to do this.  Who wouldn’t want to turn an old boom box into an iPod accessory?  I tried going to the Value Village today on the way home from work to find a cheap old boom box but the options there were very sub-optimal.
[tags]ipod, ipod mod, boom box, mod[/tags]