According to CNN Clinton said that “Human rights cannot interfere with the global economic crisis, the global climate change crisis and the security crises.”
I think she must have meant that a global economic crisis can’t interfere with human rights and security. Without these basic rights everything else is moot. Money and security mean very little without human liberties. Turning a blind eye to human rights while seeking economic benefit is no better than abusing those right ourselves.
It seems to me that the real crisis of this generation is a crisis of conscientious, from the leaders of our country to the investment bankers and everyone else in-between.

Shi landed in trouble three years ago when the Chinese government prohibited journalists to report on the anniversary of the Tiananmen Square crackdown on pro-democracy protesters in 1989.

When Shi forwarded the notice to human rights groups, the Chinese government pressured Yahoo to give them the name of the account holder, and they did so. Shi was also sentenced to 10 years in prison.

Yesterday’s announcement that Yahoo! is settling with the families of a men imprisoned and tortured with Yahoo!’s help sends a nice message, but is it enough to change the policies of companies like Yahoo!, Google, News Corp, and Microsoft which aid the Chinese government in suppressing democracy and commit human rights violations? Probably not. But that change is getting closer.

Yahoo! has tried to excuse their reprehensible actions by explaining that non-compliance with Chinese authorities could land their Chinese employees in jail. Clearly, the US needs to apply an equal pressure here. American companies must not be allowed to break national and international laws without consequence. NPR has reported that Congress is taking steps towards making this happen with something called the Global Online Freedom Act, which would make it an explicit crime for US companies to aid China’s effort to suppress and torture its people. The act finds that:

Technology companies in the United States that operate in countries controlled by authoritarian foreign governments have a moral responsibility to comply with the principles of the Universal Declaration of Human Rights.

Technology companies in the United States have succumbed to pressure by authoritarian foreign governments to provide such governments with information about Internet users that has led to the arrest and imprisonment of cyber dissidents, in violation of the corporate responsibility of such companies to protect and uphold human rights.

Technology companies in the United States have provided technology and training to authoritarian foreign governments which have been used by such governments in filtering and blocking information that promotes democracy and freedom.

The act also decrees that “A United States business may not locate, within a designated Internet-restricting country, any electronic communication that contains any personally identifiable information.” and that “Any information that may be provided under subsection (a) for legitimate foreign law enforcement purposes may only be provided through established legal channels as determined by the Department of Justice.”

The act basically says that America companies operating in China have conducted themselves in a way befitting of American values and laws. And since these companies are unable or unwilling to act in a lawful and moral manner the US Government will make them. While it would be nice if companies like Yahoo!, Google, Microsoft, and News Corp did what was right on their own it is good to see that at least Congress is trying to make sure US companies acting as the henchmen of dictators. That is, if the act ever gets voted on. 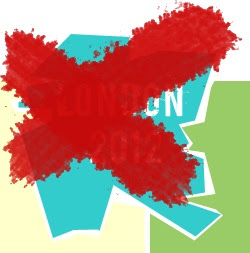 This message was not brought to you by the real Olympic Games, but is instead a demonstration of the free speech which the folks who run Olympic Games are trying to kill. Why should you care? David Edgar puts it pretty well:

By declaring images, titles and now words to be ownable brands, these various organisations and individuals are contributing to an increased commodification and thus privatisation of materials previously agreed to be in the public domain. For scientists, this constrains the use of public and published knowledge, up to and including the human genome. For artists, it implies that the only thing you can do with subject matter is to sell it.

There was an article on TechDirt yesterday that made an interesting connection and then bizarrely came up with a ridiculous conclusion.

The article pointed to a NY Times article about China’s high-tech surveillance campaign backed by technology from US companies, and connects that to two Boston Globe articles about the US efforts to track its citizens[1][2].

The TechDirt article gets all antsy about folks in congress not liking US companies helping China’s evil government when we are doing essentially the same thing here in the US, but instead of saying that it is time to check our own policies and stop US companies from doing inhuman things the author simple concludes that:

…unless we’re willing to look at the same issues in the US, it seems rather hypocritical to complain about US firms supplying the technology for China to do something quite similar to what we’re doing at home.

Clearly, we need to look at the same issues in the US, and I think in a small way we are. Do we need to do that more extensively? Of course. Does our government’s foray into totalitarianism mean that we should excuse the US companies supply technology that will be used to abuse human rights? No. Never.

When it comes to human rights no one country gets to set the standard, that standard is predetermined. The only question is how each country lives up to that standard. The US government has taken some steps back, and there is no excuse for that. The thing to realize is that nothing done in the US excuses the terrible things the Chinese government does and the US companies helping China can not be given a free pass.