If you recently installed Google’s Picasa Web Albums Uploader you got a little more than you bargained for. Google took the liberty of throwing in a daemon or two that try to connect to the internet to update and do god knows what else. You can’t turn it off from the application and it runs even when the application isn’t. Google neither asks nor mention what exactly this little puppy does (unless it is hidden in the long license agreement that almost no one reads).

You have two options:

I hate applications that check for updates without asking me. If you don’t hate that then you might be fine leaving the files in place, so long as it is just trying to look for an update to Picasa Web Albums Uploader…

Shi landed in trouble three years ago when the Chinese government prohibited journalists to report on the anniversary of the Tiananmen Square crackdown on pro-democracy protesters in 1989.

When Shi forwarded the notice to human rights groups, the Chinese government pressured Yahoo to give them the name of the account holder, and they did so. Shi was also sentenced to 10 years in prison.

Yesterday’s announcement that Yahoo! is settling with the families of a men imprisoned and tortured with Yahoo!’s help sends a nice message, but is it enough to change the policies of companies like Yahoo!, Google, News Corp, and Microsoft which aid the Chinese government in suppressing democracy and commit human rights violations? Probably not. But that change is getting closer.

Yahoo! has tried to excuse their reprehensible actions by explaining that non-compliance with Chinese authorities could land their Chinese employees in jail. Clearly, the US needs to apply an equal pressure here. American companies must not be allowed to break national and international laws without consequence. NPR has reported that Congress is taking steps towards making this happen with something called the Global Online Freedom Act, which would make it an explicit crime for US companies to aid China’s effort to suppress and torture its people. The act finds that:

Technology companies in the United States that operate in countries controlled by authoritarian foreign governments have a moral responsibility to comply with the principles of the Universal Declaration of Human Rights.

Technology companies in the United States have succumbed to pressure by authoritarian foreign governments to provide such governments with information about Internet users that has led to the arrest and imprisonment of cyber dissidents, in violation of the corporate responsibility of such companies to protect and uphold human rights.

Technology companies in the United States have provided technology and training to authoritarian foreign governments which have been used by such governments in filtering and blocking information that promotes democracy and freedom.

The act also decrees that “A United States business may not locate, within a designated Internet-restricting country, any electronic communication that contains any personally identifiable information.” and that “Any information that may be provided under subsection (a) for legitimate foreign law enforcement purposes may only be provided through established legal channels as determined by the Department of Justice.”

The act basically says that America companies operating in China have conducted themselves in a way befitting of American values and laws. And since these companies are unable or unwilling to act in a lawful and moral manner the US Government will make them. While it would be nice if companies like Yahoo!, Google, Microsoft, and News Corp did what was right on their own it is good to see that at least Congress is trying to make sure US companies acting as the henchmen of dictators. That is, if the act ever gets voted on.

A friend of mine recently told me about some troubles he had when Blogspot’s spam detection system decided that his blog was a sblog (spam blog). The process of verifying that he was a person and not a spam robot was a little annoying, but the real problem is that he could have lost everything he’d done on the blog if he hadn’t acted in time.

As it turns out that might not be the case. It seems the system Blogspot is using to find sblogs might need some fine tunning. Why? Well, Google’s own blogspot blog was temporarily erased and their account was deactivated. During that time someone else grabbed the blog url and started playing with it. Google fixed their mistake pretty quickly, but if that happened to someone else I doubt the process would have been so quick and painless.

This should serve as a reminder of the risks in allowing someone else to control your content (whether it is a blog or a DVD you bought). It is a fragile relationship. What makes things worse is that folks can’t easily backup a blogspot blog, though they do offer a complicated ten step procedure to save your blog. Why make what should be a one click process a ten step process, most likely to make it difficult for people to take their blog somewhere else. Blogspot benefits from hosting content.

WordPress.com allows folks a way to export their blog as XML in one click, which is great. Even then you don’t get the same control as hosting your own blog, but you do get much more safety than blogspot. Many folks learn the hard way that you should backup your computer files often unless you don’t mind losing all your stuff, the same goes for blogs. And if your blog host doesn’t let you do that then you should look elsewhere.

eBay was a bit upset because Google planned an event to promote Google Checkout on the same night eBay is holding a Paypal event. As payback eBay pulled all their ads with Google and issued a statement about being “disappointed.” Of course Google has a pretty good case for being disappointed with eBay since eBay has banned Google Checkout from their site. eBay is clearly trying to keep the competition out. Considering how much of a cut they get of each transaction that happens on their site once you add the eBay & Paypal charges it’s easy to see why they’d want Google to steer clear of them. They suck for banning Google Checkout, but fine, it’s their website they can do what they want— even if it sucks for customers.

Still, it is worth wondering that if eBay realizes what a hypocritical bullshit thing it is to pretend you are taking the high ground.

Ignoring the arguments about whether Google is as good as they claim to be, one has to admit that they have a sense of humor. Take for instance their directions via google maps to get from New York, NY to Paris, France. I don’t know why I’d never considered just swimming the 3,462 miles to save on that costly plane ticket. 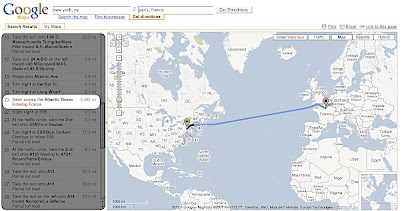 My brother showed me a couple of other cases of slightly evil and very evil being kind of funny. One is the now famous “Wooden Spoon Prank” check you tube for the dozens of people trying to imitate this.

The other is less known, but about a thousand times more evil. It is actually only borderline funny because it is so mean.

And of course all of this is courtesy of youTube, which is owned by Google… along with the other third of the internet.

The recent talk of Microsoft buying out Yahoo! reminded me that I wanted to write a little about why I try to avoid companies like Yahoo! and why other people should do the same. Corporations are not known for their compassion, but companies like Yahoo! have (for a while now) taken dispassion to a new level.

A little over a year ago news broke about Yahoo! giving the Chinese government information to identify political dissidents. Now a dissident and his wife are suing Yahoo! for getting him arrested and beaten. His crime— distributing articles for democratic reform. An American company is helping stifle democracy, but even worse it is helping commit human rights violations. Why would any company want to do such a thing? What could possibly be so important that a company would willing help a government find someone to torture? Wouldn’t it be nice if the answer wasn’t obvious?

Yahoo! would like people believe it cares (it doesn’t), so its spokesperson reminds us all that

Companies doing business in China must comply with Chinese law or its local employees could be faced with civil and criminal penalties.

Which is of course a cop out, but the world has a way of suspending honest reflection in the present if it is beneficial, only to show remorse for an inability to see the whole picture until a later retrospective moment. Or to put it another way, we turn away from what we can change to focus on what we can not, because it helps us. If the cost of doing business in a country is to have people beaten then the cost is too high. If the cost is to do things that positively retard the possibility of positive change in the country that cost is too far high. Or at least it should be.

And to be fair though Yahoo! isn’t the only one, just one of the worst. Another contender is the new Chinese MySpace. A company owned by Rupert Murdoch, who paradoxically owns Fox News, a channel that claims to be passionate about exporting democracy to countries like Iraq. MySpace China actively censors political conversations and encourages people to report dissidents to the government. On MySpace China you can’t mention Democracy, an independent Taiwan, or the Dali Lama. Nor can you do anything that would harm the unity of the country, so watch out.

Even the folks at Google (the company that claims they “don’t [want to] be evil”) are willing to sell their humanity for prosperity in China, asking shareholders not to vote for a policy that say they won’t engage in “proactive censorship.”

Corporations and The Market are amoral and inhumane, but America doesn’t have to be. Clearly, there needs to be laws created to deal with these things. So long as it is profitable and semi-legal corporations will eagerly participate. Changing the way American companies do business in China can only be positive— ultimately business won’t be lost because the Chinese government wants China to be modern and global. If they can’t dictate how that happens they will still do business, because otherwise they won’t get anywhere as a participant in the global community. People argue that by playing their game we are opening doors, but it is painfully obvious that we aren’t opening doors, we are nailing down the windows.