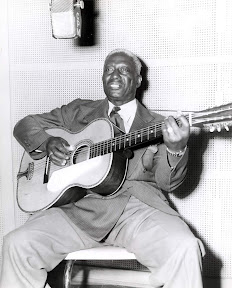 When I first started playing the guitar I became obsessed with the blues. One reason was that as an aspiring guitar player I wanted to emulate the greats blues guitar players. I also starting to get bored with the music on top-40 radio stations. I wanted something interesting and blues fit that want perfectly. Then I went to college and discovered indie radio. That was that a eye-opener, but even after finding great new music I still found myself listen to great old music.

There are lots of blues guys to really go crazy about, but one that I’ve always loved is Huddie Ledbetter, aka “Lead Belly” (or “Leadbelly” if you want to go by what record companies say). One reason I love Lead Belly is that he was one of the first blues musicians I heard. There was also Lightnin’ Hopkins, Bukka White, and Howlin’ Wolf.

The origin of Lead Belly’s name has become myth, some say it is a play on his name referring to his physical toughness, or possibly even from surviving a buckshot in the stomach. Most likely he got the name while in jail— he was in sentenced to 35 years of prison twice, once for murder and once for attempted murder. Amazingly he was pardoned both times and barely served any time at all. Both pardons were won through Lead Belly’s musical abilities. Lead Belly’s music is gritty, soulful, and intelligent. A lot of his songs weren’t original but everything that he sang so clearly belonged to him in an intense and honest way. Below is a song I’ve taken from The Internet Archive; like so many of his recordings it is rough, which is a mixed blessing because the cracks and pops offer their own nice aesthetic, but they also obscure an amazing musician (I don’t mind it).

So I haven’t had time to play with tuneDNA. What I have had time to play with is Pandora Internet Radio, since I can use it online independent of my Mac or iTunes. So far so good. I like it much better than Last.fm though I can’t say if it really is better since Last.fm was such a sort trial.

Selection: Pandora reports having over 20,000 artists and 400,000 songs. I’ve found just about all the indie and indie-ish music I’ve looked for, so I’ve been happy with that. Blues also seems to be pretty well stocked. I’ve yet to try other genres but I did read that they have no classical music just yet, so there’s that. My guess is that they aren’t hurting for major artist either since they have licenses with SoundExchange, ASCAP, BMI and SESAC. Having worked a lot with college radio years ago I’d say this has to be pretty expensive for them.

Interface & interaction: The interface is pretty simple and intuitive. It shows cd cover images, the title of the artist, song, and album. You can skip tracks it suggests (though there is a limit due to license restrictions) and pause songs. You can’t go back, again because of license restrictions. You can create multiple stations rename them and add artists and songs to those stations. You can also bookmark artists or songs. You can do more too but I’m getting bored just writing this much— if you want know more you should go see the site for yourself. While there are nice things I should also add that the interface is also boxy, with a brushed metal theme… or put another way, it is ugly.

The music suggestions are pretty okay. Nothing blew my mind though I did find some interesting things. More often than not I was at least okay with what was playing, though there was the occasion that I raced to the “skip track” button.

A warning: right now there are no ads, but there will be soon. As it stands I would recommend trying Pandora Online Radio, but that recommendation may be revoked if the ads are done poorly. From their website:

Q: What about advertising?
The free version of Pandora is supported with advertising, which we’ll ramp up over the next few months. If you don’t like ads, you can banish them altogether by subscribing.

The biggest disappointment is the lack of community focus on the site. It seems like a no brainer to try to emphasize community, not only is it nice for the users, but it also builds brand loyalty while adding a service that requires little work (the users are responsible for most for the vast majority of the content).

I’m also aware that there is an exchange going on here, they capture my information (age, area code, gender, and music tastes) which they treat as a commodity. For that I get to listen to music for free online that might be slightly more tailored to my tastes than other free form online stations.

I am also aware of the fact that if I used only Pandora I’d lose the opportunity to be exposed to different music that I might not even be aware of and which Pandora would have no reason to ever play for me. Independent radio still has it’s place, though if there was a community aspect to Pandora this might negate the issue, even if only slightly.
That’s all I have to say about Pandora at the moment.

You would have to be crazy and stupid to hate Billy Bragg. That is all there is to it. Today on KEXP I heard a song he played live for KEXP, that isn’t the only place to find it, but it’s the one I think sounds best. Sadly, KEXP uses WMA & Realplayer… I’ve mentioned it before, but let me say again that those are crappy formats. If you want to hear KEXP’s version look under live performances. Anyway—

This new (to me) song’s title is Bush War Blues, which is of course and allusion to Leadbelly’s amazing song Bourgeois Blues. Leadbelly wrote his song after having a bad experience in Washington DC. Billy Bragg is just having the same hard time that all of America, and the world, is having. I suggest you listen to both of these songs, and I offer them both to you here. First some lyrics, and below you’ll find the audio.

me and my wife we were standing upstairs
we heard a white man say “I don’t want no niggers up there”
lord, he’s a bourgeois man
woo bourgeois town
I got the bourgeois blues
gonna spread the news all around