I went to Hokkaido (北海道) over Golden Week, which takes place over the end of April and the beginning of May.

In this first installment I want to talk about getting there. 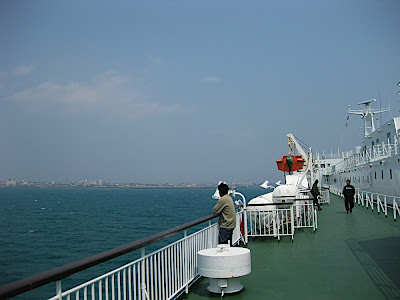 I took the long route. Also know as the ferry. I left from Fukushima City (福島市) to sendai (仙台) and from Sendai I took the ferry overnight.

The ferry is by far, the cheapest way to get to Hokkaido. Roundtrip tickets cost a lot less than half the price of a plane ticket. The price you pay is time, it took about seventeen hours to get there.

The “ferry” is more like a cross between the ferries I’ve been on in the US and a cruise ship. There is a range of rooms from suites that can match any four-star hotel to a giant room with fifty futons spread across in the floor. There is a movie theater, a restaurant, a bathhouse, a game room, and a few more fancy things which I didn’t really care about.

I spent most of my time in the lobby area with my friends. There were tables and slightly comfortable chairs, so we stayed up late played a few games and then hit the hay around 1 or 2am.

I was so tired I thought for sure I’d be out the minute my skinny butt hit the futon, but that was not what the night had ready for me. One treat I was offered was a loud guy talking just outside the room all night. He wasn’t Japanese, but he spoke it well enough to hit on a Japanese girl all night, and I do mean all night. Once I figured out how to close the door to the large room I was tossed another delight, the standard super loud snoring guy. This one came with sleep apnea action. The bonus was when he made sounds like he’d just swallowed a golfball at 4am. …And just for good measure he got up and fell on me, giving my leg a taste of pro-wrestling elbow-drop goodness. What a peach that man was! 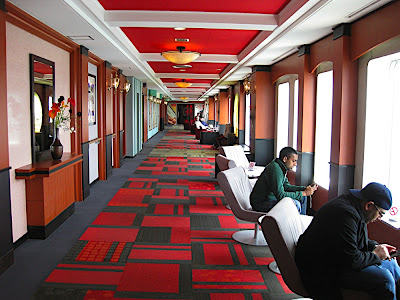 The only thing that kept me alive the next day was the bathhouse. I’d never been to one before in Japan, but let me tell you this, if you ever need to function after only sleeping an hour and a half a bathhouse is a pretty good way to fight through the day.